Testarossa is releasing the 2018 Pisoni Vineyard Pinot Noir, and a release of this magnitude calls for a lengthy introduction. 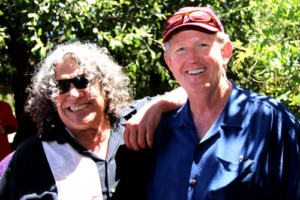 Anyone who has met Gary Pisoni knows that he has a bursting passion for Pinot Noir. His fanatical approach to Pinot Noir growing is possibly only matched by his passion for Pinot Noir drinking. His larger than life personae has almost a religious dimension as the parties in the Pisoni caves have an unmistakable Dionysian character. This passion for Pinot Noir has rubbed off on an army of followers, and because of extremely low yields coming from the vineyard, collectors eagerly snatch up anything with the designation of “Pisoni Vineyard” with cult-like frenzy.

While universally considered one of the great Pinot Noir vineyards in the world, it took the vision and perseverance of Gary Pisoni to make it a reality.

Pisoni Vineyard was planted from a ‘suitcase’ clone smuggled from the legendary La Tâche Vineyard in Burgundy (a fact that Gary will neither confirm nor deny given the legal ramifications, although after a couple bottles of Pinot Noir he will sometimes share the story of a rather salacious security check). 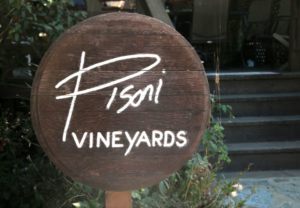 Back in Monterey County, finding a reliable water source was a feat that almost bankrupted him due to multiple drilling attempts. Each attempt costing up to $30,000, he eventually struck a well in the highest, and most unlikely place on his ranch on his sixth attempt with the aid from a water dowser that he met in a local bar. Now, he protects the healthy vines from envious growers by scattering bullet shells around the perimeter of the vineyard to scare people off. Those brave enough to take cuttings from the first rows will be disappointed to discover they fell for a trap and their cuttings were only Merlot!

This above and beyond approach to the founding of the vineyard is only the tip of the iceberg as it is the year in, year out farming practices of the Pisoni family that truly make this site special.

Gary’s son, Mark Pisoni, has taken over the reigns for vineyard management, and he’s taken a meticulous approach to shepherding the vines. Extreme deliberation is taken to make the best fruit possible, and his efforts have been recognized beyond the “Sustainable in Practice” designation for agriculture. 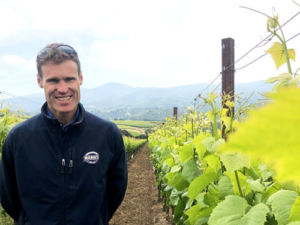 He has recently won the coveted “Green Medal in Sustainable Winegrowing Leadership” award, which has only been given to a handful of sites. Mark has implemented methods that go beyond the typical vineyard management program, such as Integrated Pest Management to create natural ecosystems for vine health without the use of sprays and hoeing weeds by hand. Unlike many vineyards who use temporary labor to prune and harvest, he manages a team of long term employees who know the vineyard intimately and approach each vine uniquely. To manage a vineyard on this level takes extraordinary effort, and given the vineyards unique orientation within the Santa Lucia Highlands, this approach makes Pinot Noir of world-class quality.

We are humbled to have partnered with Pisoni Vineyard since 1997 and are excited to share our 2018 vintage with you. We think it is one of the best vintages that we’ve produced, which is a bold claim given its history of spectacular releases. Cheers!