After numerous calls and inquiries over the years to the ownership at Lucia Highlands, we scored when Bret Sisney (co-owner) called me out of the blue in 2010. He, his wife Carol, and partner Gary Filizetti were looking to diversify their client base from their 60 acre vineyard in the Northern Santa Lucia Highlands AVA. Once we started talking we realized we were on the same pathway of growing and producing world class wine from their site. There were many more life parallels that also would bind us together cohesively. 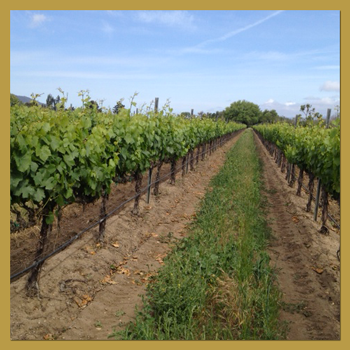 You may ask why we were so drawn to their site, it is because it is in between the famed Sleepy Hollow Vineyards, where we had been sourcing since 1997. In 2008 when they switched winemakers, we quickly learned that we were not as welcome nor a priority anymore, perhaps given we had brought much critical acclaim to their site beyond what was coming from their own wines. As the new winemaker was aware of this, he started to take steps in 2008 and 2009 indicating that they were not going to deliver the same quality of fruit as in the past. So you can imagine, it takes time to find an equal or better replacement in any wine region, hence my haste for tracking down Bret, Carol, and Gary.

As we started talking with Bret, our contact at the new vineyard, we were getting very exciting about future possibilities. The two key, equally important ingredients, when commencing a new vineyard partnership, are the people involved (from tractor to ownership) and the site (climate and soil). So after a short visit with the people and the site, it was apparent this would be a future anchor for our Chardonnay and Pinot Noir needs in the Santa Lucia Highlands. For the meantime, we would have to temper our enthusiasm as Bret had only 10 tons each of Chardonnay and Pinot Noir for us to purchase in 2010…

Working at a winery located near Silicon Valley is somewhat of a detached feeling from our vineyard sources in the Monterey, San Luis Obispo, and Santa Barbara Counties, however, Bret, Carol, and Gary live and work in the Bay Area. It was as though we spoke the same language when it came to business, philosophies, etc. Also, we came to find out both Bret and Gary are Santa Clara University graduates along with Testarossa founders Rob and Diana Jensen. It is really neat to see them stop by at the winery as often as they do, as much of our other growers have great distance between us and them.

Along comes 2011, and we continue to hit it off with the owners, we are looking to purchase even more fruit from the vineyard. Rob Jensen did raise a concern about the vineyard name being ‘Lucia Highlands’ because the appellation is called ‘Santa Lucia Highlands.’ So with this concern, we started a name hunt for us to call this new vineyard, of course with permission from the vineyard owners. At the time, we were in the spirit of ‘less is more’ when it came to vineyard names. Given the abundance of fog, we knew that had to be a part of the name. To classify the soil conditions, we thought a reference to ‘stone’, would be accurate as there are some stone outcroppings throughout the upper parts of the vineyard. So there you have it… I even recall sending Rob Jensen a photo of a pile of rocks to validate our new name. Just some of the funny things we do at a winery…

As we bottle our 2010’s, we could not be more excited, especially since the vineyard owners share our desire to make world class wine. Part of our vineyard strategy is to assess the current farming practices, and align them with our current and future needs, as well as respecting the fiscal needs of the vineyard owners. That being said, we started to look at a multi-year contract for us and the vineyard. This is the point in fruit sourcing much akin to the act of marriage.You know you are devoted when both sides want to go into long-term arrangements with no end in sight… As part of this process, we started to look at fertility and watering treatments in the field, along with chemicals used for mildew and pest control. After some years of retooling, and research and development, we have landed an even more incredible quality potential from the property.

With chemical inputs, other than weed control, we have switched to all organic products, in the spirit of pushing the envelope for expression from the site. Farming with less impact yields a much more distinctive product, which also respects the site for many more years to come. These changes have produced much more complexity, distinctiveness, and purity that we rarely see come out of this region. This process, while not the easiest path in farming, leads to amazing results when performed effectively. We are fortunate to have such supportive partners in the journey towards crafting the best expression of Fogstone.

One of my favorite moments in the history of the vineyard was when the owners agreed to install moisture meters in the field. While many growers do not like ‘probes in their dirt’, Bret could not have been more excited to get weekly data graphs showing water stress. It was as though I had found the missing link between owners and vineyard managers as to how much water is necessary. Bret, being my contact point, really got into it, even to the point of pushing the envelope more than I normally would with a grower. His comfort and confidence with his vineyard manager and myself grew exponentially when he could be involved from his office, 80 miles away from his vineyard. The outcome of proper water management has doubled the color of the Pinots from the site as well as increased the concentration of all wines.

So now, purchasing nearly 75% of the vineyard, you can see how the relationship has blossomed. This year we have opened a new chapter in the vineyard as the owners want to replace some blocks that are not performing at the highest standards. While the yields are still economical, they have increased their quality desires, much as a result of our close working relationship. We will be planting some tighter spacings of Pinot Noir which should outperform the remaining blocks in the next 5 years. While this seems a ways off, it does not hurt to plan ahead as from planting to bottle goes by fast in the wine business. While we will miss Sleepy Hollow, we are glad we found Fogstone, where we have closer ties not only to the site, but also the people.

The 2015 vintage captures all of our hard work these past 5 years and an exciting journey. We hope you enjoy them as much as we did searching, bonding, farming, vinifying, and pushing ourselves towards excellence. We look forward to many more exciting renditions of Fogstone in the years to come.